Skip to navigation Skip to content
25
- July
2006
Posted By : Adrian Chan
No Comments
Philosophical interlude: towards a smooth network of links 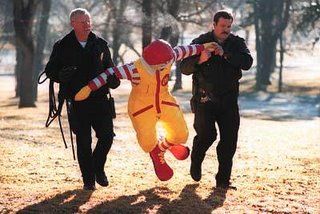 Back, not so way back, last century, debates would rage over the cutleried and flint-struck din of Parisian cafe’s about positivism. The local left-bank philosophical elite, including the Pierre not there (money to whoever gets that joke!), were for dialectics. Dialectical reason. Marxism had postulated that late capitalism would encounter its contradictions and resistance. Progress is borne of the synthesis of oppositions. Thesis, anti-thesis, synthesis. Positivism, a mode of inquiry buttressed by the empiricistic scientific method, which was to find truth in the material of reality, but locating within it the rational principles of a consistent physical reality… Hegel would have sat bolt upright and smoked a Gauloises.
And I’d have snatched it away from him. Drawn a couple puffs. And coughed this out: there’s a positivism in the internet, on the web, in the hyperlink… I see a smooth space of links, ratings, approvals. A there that’s there for having been seen enough times that it made the cut. And contradictions, negations, and disagreements disappearing, absent stories having been buried under a mouse-trigger-happy thumbs down. It’s easier saying “yes” (while not really meaning “I agree”) than it is saying “no” (and here’s why). What in conversation becomes a discussion — a clarification of perspectives, positions, views, whether leading to an agreement, a peace accord, a declaration of independence or not, doesn’t matter — doesn’t go the same way online.
We need perhaps to differentiate better between simple expressions of “yes” and “no” (Digg’s up and down diggs) and more complex procedures. For sure, a medium built on binary code is able to handle yes/no, on/off better than “let me get back to you.” Presently, a bevy of companies, retailers, marketers, advertisers alike are running amok with user-generated phraseology, user-generated documentary, user-generated protest songs and other user-generated idioms. I yearn for a day at the nature-generated beach, complete with full-on nature generated events like an in-your-face sun and the sound of waves crashing that you can’t turn off, can’t even turn down, except by inverting your upper body and thrusting neck and head deep into sand.
Problem is, vote yes and your vote counts as two: a yes vote, and a count me in vote. Vote no and your vote counts as one: a non-yes. The anti isn’t counted. It counts for nothing. Cultures, cliques, groups form around similarities (Tartan video extreme Asia film title renters who also do their chopping with Ginsu knives purchased off the TV in the late 1980s). They don’t form, and so there’s nothing to record, around the non-event of a no.
Is there a philosophical bias, a positivism, online, and in our electric media? Is there a tendency intrinsic to the medium, not in its act as means of production, but in its act as recording? Does this not slowly grind down differences? (Don’t come to me with Darwin now! Social Darwinism is no good thing in my book!) I’ll have to think more on this one. Perhaps a world that records affirmations so much better than it records objections is not the worst thing in the world. It is only virtual, and we’re not in the Matrix yet, I don’t think….

…Which leads me to a flip finishing line. There’s an interface dialog box I’ve always wanted to see used: “submit” and, in place of cancel, “resist.”