Skip to navigation Skip to content
18
- January
2007
Posted By : Adrian Chan
Comment : 1
Here’s talking at you, kid… It’s all talk on social media 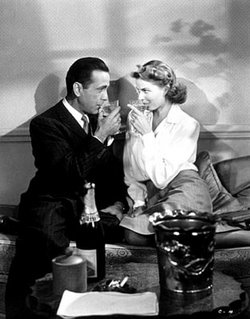 “Of all the gin joints in all the world, you have to come into this one…” Ever get that feeling that there’s a whole lot more talk going on here than there is listening? That perhaps the medium itself is biased? That the writing medium only captures statements and utterances, posts. It only captures us when we talk. It doesnt capture us when we don’t talk. And because the screen here can only show what its design is capable of seeing, nothing exists that is not added to it. And we know that. The web’s speed has increased these days to such a velocity that it’s become impossible to think without having to communicate about it (as i’m doing now, if just to make a point).

I’m reminded of the Fawlty Towers Germans episode in which Basil Fawlty (John Cleese), in the middle of hanging a moose head on the hotel lobby wall, has to climb down from a stool to answer the phone, at the other end of which is his hospitalized wife, calling to ask if he has hung the moose head. And his response, something along the lines of “I’m doing it! I was just… I mean, what is the point you stupid bint? I was just busy doing it and then i have to stop doing it to pick up the phone to tell you that i was in the middle of doing it?! I mean is there anything esle I can do for you? Move the hotel a couple feet to the left?’

There are of course many ways of talking. But this mode, which is for the most part “talking to oneself”, produces a strange conversational effect when it involves attaching comments to others’ posts, responding to comments in posts, posting on posts, and so on. I wonder whether we’ll recognize each other, some day (and I hope far away). We’ll recognize ourselves, of that I’m sure. But will anyone else? Well there’ll be gin joints to stop into. And some day, some where, in some far off gin joint along the norther coast of Morocco, in a town known as Casablanca, somebody will say “here’s talking at you kid” and perhaps there’ll be nothing wrong with it…