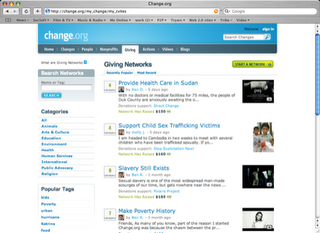 Many sites use a combination of blogging, commenting, voting, tagging, social networking to capture user-generated content and user interest in niche markets/themes. The mix of communication to the community, and communication among and between members (directly to one another or indirectly, “in front of” an audience) drives interest and participation. I’ve been looking at various sites with an interest in how the mix of user contributions, news, blogging, voting, commenting etc achieve the site’s goals. How do sites capture user contributions such that the end result is greater than the sum of the parts? How do sites use votes, tagging, commenting, linking and so on to produce an aggregate view of community member interests? Change.org struck me as a job well done, and in contrast to sites that organize micro-funding, or that just engage users in talking about change, Change.org adds actions and asks members to make commitments. It’s got a bit of 43Thingsand a bit of Yelp.com. Members identify their change interests, and find others they agree with. They compliment each other by voting in agreement with other members’ commitments to change. Those compliments become complementary; like-minded members create momentum for change. But there’s a risk to organizing the site around affirmations. Read on…

Insofar as this site is user-centric, that is, based on the interests of members and not on, say, fundable overseas development projects, it takes a very local approach. I’ll be interested to see how it does.