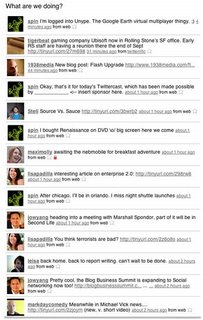 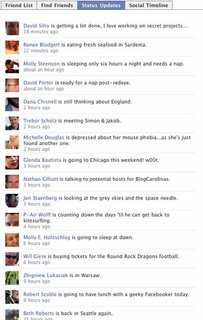 Twitter was conceived as a status updater copasetic with sms. Ironically though, it’s become a personal broadcast service, while facebook’s status updates read like true updates.

We write to an audience, in this case twitter followers or facebook friends. Here facebook has the advantage in that we can take our audience for granted, whereas on twitter our sense of the audience generally diffuse.

Twitter does produce those brief conversational runs — an effect of the tool’s strange manner of creating presence.

Twitter posts are more likely to be conversation starters. and are more talkative. They often invite acknowledgment if not response.

Facebook status updates tend to be tales and statements, told in a non-conversational tone and for the purpose of getting on the radar.

Twitter can be more addictive for the reason that we might itch to check it — for replies or news. It’s more psychological.

Facebook’s feed is more of a social utility, and it seems less psychological (there are pokes, walls, and apps for that).