Table of contents grab from amazon.com 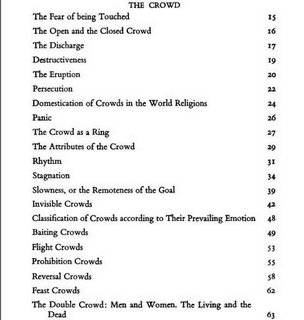 I’m reminded now and again of this book, which describes crowds, audiences, tribes, mobs, assemblies, riots, gangs, and all manner of aggregations of people in the kind of prose that’s now a rarity. For those of us in social media interested in the many ways in which our technologies assemble audiences, this Canetti offers serious insights.

He details differences between mobs awaiting, crowds gathering, audiences listening, mobs erupting, riots exploding, queues queueing, and so on… To Canetti, each social assembly captures not only a different force, but embodies (literally!) different affects. They are oriented to an other, or huddled in self-defense. They anticipate in patience, in frustration, or in awe. They worship or hound, condense or flee. They surround a leader, pursue him, or depose him in masses gathered in the public square.

Our media don’t do quite the same things, of course, but there are similarities and inspirations aplenty here.

And to go with it, perhaps, the film Grass, a 1925 documentary (intertitled but no voice over — just music) about Bakhtiari tribes gathering their herds for an annual migration to grasslands. Have you ever seen livestock herded downriver by swimmers?

Grass review, from imdb.com : Fantastic documentary of 1924. This early 20th century geography of today’s Iraq was powerful. Watch this and tell me if Cecil B. DeMille didn’t take notes before making his The Ten Commandments. Merian C. Cooper, the photographer, later created Cinerama, an idea that probably hatched while filming the remarkable landscapes in this film. Fans of Werner Herzog will find this film to be a treasure, with heartbreaking tales of struggle, complimented by the land around them, never has the human capacity to endure been so evident. The fact that this was made when it was shows not only the will of the subjects, but of the filmmakers themselves.