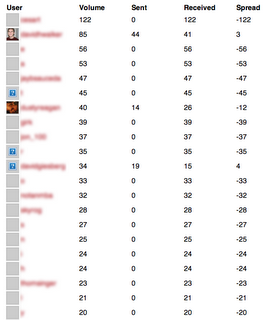 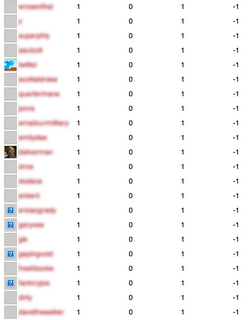 I geeked out on tweeterboard.com last night and found myself getting lost in the conversation metrics the site displays in its box score tab, and which it presumably uses to calculate reputation scores. Their metric’s not transparent to me, and if anyone has thoughts on how they calculate reputation, I’d love to hear from you. But I got to thinking about it, and so began mapping a few measurements of my own to see if they made sense.

In doing so, it quickly became apparent that “reputation” is in itself a fuzzy marker. And in the context of conversation and conversation analysis, especially.

For example, reputation speaks of the person, firstly. A person has a reputation. How is it earned? By their identity? By what they say? By who they know? And who knows them? By appearance, or by fact? By integrity, consistency, and other personal attributes. But also by their social status, their contributions, credibility, and effectiveness even.

In terms valuable to social media marketing, reputation might mean influence to some. Authority to others. Credibility and experience. Popularity and social capital. Participation and involvement. Also responsiveness and social value as a hub or connector.

Perhaps reputations are multiple — reputation for something. For leadership, for success, for matchmaking, for consistency, for connectedness, for influence, for independence.

And if reputation is also to be used for something, that is, leveraged in womm viral campaigns, for example, consumers/users will offer value according to the type of reputation they have.

Individual influence varies according the communicability of their status in a social graph/social network. I have friends whose restaurant recommendations I would take no questions asked, others who can recommend films, music, or car repair. But they’re all different people. Recommendations are personal, and so there’s little knowing about a recommender without knowing about his or her relationships.

Which was why this exercise was so interesting: conversations captured on twitter at tweeterboard reveal several of the elements critical to reputation analysis. Granted that without semantic content analysis, they’re only structural. Interesting nonetheless, however.

So now, to tweeterboard and this exercise in imagining reputation metrics. First off would be the conventional Friend and Follower count. Should be fine, but there are already potential issues here. (Note: by analogy to serp/seo/sem speak, friends = links; followers/followed should = link polarity.)

Number of followers : should indicate influence by means of popularity. However twitter users add friends as fast as Britney Spears loses them. Friends make a person look like somebody, are a friction-free connection (on twitter), and are a means to being found. In other words not a good enough indicator in and of itself.

Number following : should indicate enagement, and some amount of social context. You follow who you know, and who you find interesting. But here, too, the number is biased. It serves to enhance a user’s appearance, and is not an declaration of either interest (level or kind) or attention (listeners are not always listening).

So then qualify influence by number of people with posting frequency (for participation level) and post volume (for engagement).

Number of posts: Post volume and frequency is the currency of measure on a conversation tool. Like money supply and velocity, posts are flow volume and rate of flow. Here again, there is an issue, for when it comes to reputation, all posts are equal but some posts are more equal than others. There are users who produce torrents of tweets, and who clearly enjoy twitter as a kind of group IM/chat. And others who post to make a point. And all points in between. Activity online is not all action, and communication online is often inactive communication (or communicative inaction — a bug/feature that Facebook has raised to a cultural phenom with its activity, news, and friend feeds and status updates).

Communication becomes action, so say the linguists, when it takes the form of moves: statement – response. Talk is serial by nature, and so conversation usually involves a round of moves, or what we sometimes call “turn taking.” The low rate of response and the improbability of responsiveness on a public or semi-public chat tool like twitter is a simple and direct byproduct and symptom of the technology’s presence bracketing. Users don’t know who’s paying attention, not to mention who’s listening. If talk were supposed to be a reciprocal exchange of linguistically embedded claims upon speaker and listener leading to understanding, agreement or even consensus, twitter would not be our first choice of talk format!

But that’s what makes it so compelling — clearly “conversation” doesn’t even begin to describe what twitter is or does. Social media are about new forms of talk (and new forms of presence). I’m preaching to the choir — we all get this.

Onward, to more of what Tweeterboard must presumably fold into its fluffy mix of conversational dough (read: currency 😉 ).

The spread: Now this one is fascinating. High spread numbers (e.g. between two twitter users, number posts to @recipient vs number posts received from recipient to @sender) indicate asymmetry. Meaning that these users don’t like each other equally? No way to know that, so how about these one user wants more from the other? A negative spread shows that the user sending messages isn’t getting equal number of replies. The issue here is that we can’t measure the relationship by sent/replied because twitter is imperfect. @name messages may go unheeded because they’re missed — that simple. Message delivery is imperfect on twitter because so many users prefer to @name in public (for valid social reasons, mostly) than direct message (even tho the latter offers a higher delivery guarantee). Posting @name in public accrues visibility and social capital to the sender, not to mention findability. Same for positive spreads.

Then there’s the difference between @name posts and @name citations. When a tweet begins with @name, it’s usually for @name. But if @name is cited within a post, it’s possible that the message expresses thanks, recognition, or is a citation, promotion, or other form of social referencing and distribution. I wouldn’t have a clue if tweeterboard makes the distinction. The high degree of @name citations on twitter would suggest it that these uses could be used to build soft (tacit) social graphs. (Interesting thought: a Milieu Metric).

Some, and often highly influential twitter users, also show a large number of orphaned post exchanges. These show up as 0:1 or 1:0, and are indicated in the box score as 1 or -1. A very large number of 1’s might indicate that other twitterers want to be in this user’s audience and circle. But again, it might simply mean the user missed the @name message. Hard to know intent, but absolute number of 1’s/-1’s would seem to suggest visibility and social capital.

Getting creative, here are few other possibilities that spring to this (now tired) mind.

@name cited (but never sent to @name : this might indicate rubbing elbows, or wanting to appear in the company of @name. Benefit to user posting but not directly communicating to @name would be apparent social capital (what I like to call social media’s proclivity not just for appearance but also “apparancy”).

@recipient_name sent or cited and leading to other @sender_name replies : would raise the former to the level of friendship, e.g. from clique to group. Because in this version the reply is more than a citation, it’s reply. Attention is paid not just to the @name cited but to the @sender who posted the citation. Could be used by marketers to suss out active conversationalists.

@recipient_name sent or cited and leading to other @sender_name citations : is somewhat uncommon, but responding to the poster not just the post is a sign of friendly attention and might be a metric of social presence. This is a “great to see you” moment and proffers a measure of relational density. Unless the message is nasty and mean, it’s a sign of friendship, for the users are acknowledging each other (from “i follow you to I see you,” or to quote Genesis, “Follow you, follow me”; every look wants a look back, and online “I see you” must be stated explicitly, so it’s always *already* “I see you and therefore I want to see you seeing me” — and on twitter, if this is in front of others, all the better!)

Ok, enough for now. I came up with more but you’ll have to hire me. (just kidding.)

gratitude and respect goes to Stowe Boyd for pushing the conversational index long ago, and for reflections on twitter and the flow