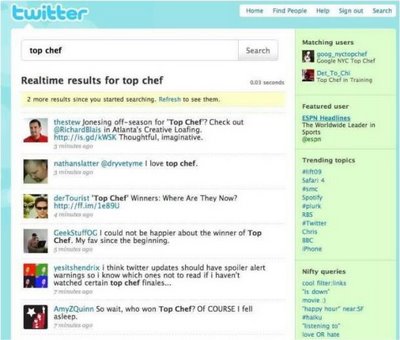 The recent skittles twitter campaign used a feature in limited testing at twitter. It’s called integrated search, or real-time search. You could see it at work Sunday & Monday on the skittles.com homepage, or in the picture here taken from a deck by Fred Wilson and covered recently on Cnet. New search results are posted to the top of a search results page in real-time, effectively transforming search into conversation.

It has the effect of aggregating conversation within twitter, by threading posts around the search phrase or keyword. This strikes me as a potential game-changer for twitter, for several reasons.

We currently hold “conversations” on twitter with followers. We have to search to find non-followers around topics. But there are barriers to bringing them into the conversation. Results are past results, and we have to follow/be followed back before conversation becomes possible.

So conversations tend to happen between people who follow each other. If they are topical, they tend not to mention the topic. And this makes them less easy to find in search. Twitter addressed this recently. If there has been conversation between users (using @replies), it is now visible with the “show conversation” link.

But there are limitations to the usefulness of the “show conversation” implementation:

“Show conversations” doesn’t really capture conversations, but captures an exchange between users who have @replied each other. Only the first tweet in the exchange has to contain the search keyword.

Twitter certainly realizes that it needs to searchable. But it also realizes that search results are limited to our use of search words and phrases. And limited by the fact that we have only 140 characters at our disposal. If twitter went after conversationality, it could do so only by aggregating the conversation around an exchange between users who follow one another — not around topics.

The following-follower model that has made twitter so incredibly viral has been a constraint on conversations. Each of us has only a small window through with to see what a small number of people are talking about. And only a limited means of capturing and sustaining conversation with people around a topic.

Twitter was designed in such a way to prohibit conversations. Not intentionally, of course, but symptomatically. Conversations require a kind of coupling between statements and responses, and people in conversation, that twitter makes incredibly hard to achieve.

This new version of search could change all that.

First of all, search results couple tweets by topic. That gets us part of the way there — but is still a threaded view of past tweets. It is not threading of a conversation held between users tweeting to each other. Live search, however, achieves two important improvements.

Real-time integrated search pages would now look like a version of slow chat between people around a topic, and who do not have to be following one another.
There will be consequences — intended or unintended — if twitter launches this feature. Some of us will pick up followers we find on the basis of real-time search results. If you and I go a few rounds in real-time search results on a topic, the odds are good that we’ll follow each other out of politeness. The unintended consequence would be a dramatic increase in follower counts — as we add those we have had passing interactions with. And there will be serious consequences for twitter’s tweet volume if it becomes a kind of slow chat around topics.

This kind of chat or forum would have some pitfalls too. We would have to continue to use the keyword in order to appear in the results. Twitter might want to glue tweets to results by pre-populating a post made from search results with the keyword in use. Or by some new form of @reply (@topic?).

And there will be consequences for twitter app developers. I would want a tweetdeck chat panel, for example, that allows me to search a topic, see real time results, and post to members of that “chat” window. (Will real-time results be available to third parties?)

Many of us are already using twitter in a much more chat-like form, but among followers. Topical chats/forums would make for an incredibly powerful use of twitter. They would change how we use twitter, who we follow and why, how we pay attention to it, and to whom. And at the same time, it seems that tweet volume would explode — rendering our current use of twitter nearly unusable. (Those of us who go into burst mode are already creating headaches for low-volume users.)

Note: This blog post belongs to a series on “status culture.” The posts examine status updates, facebook activity feeds, news feeds, twitter, microblogging, lifestreaming, and other social media applications and features belonging to conversation media. My approach will be user-centric as always, and tackle usability and social experience issues (human factors, interaction design, interface design) at the heart of social interaction design. But we will also use anthropology, sociology, psychology, communication and media theories. Perhaps even some film theory.
The converational trend in social networking sites and applications suggests that web 2.0 is rapidly developing into a social web that embraces talk (post IM, chat, and email) in front of new kinds of publics and peer groups. User generated content supplied to search engines is increasingly produced conversationally. Social media analytics tools provide PR and social media marketing with means to track and monitor conversations. Brands are interested in joining the conversation feeds, through influencers as well as their own twitter presence.
This changing landscape not only raises interesting issues for developers and applications (such as the many twitter third party apps), but for social practices emerging around them. So we will look also at design principles for conversation-based apps, cultural and social trends, marketing trends, and other examples of new forms of talk online.
These blog posts will vary in tenor, from quick reflections on experiences to more in-depth approaches to design methodology for conversational social media.