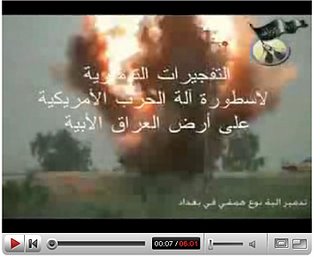 The New York Times today had an interesting piece on YouTube, and it wasn’t about Google’s acquisition offer. It was on videos posted to YouTube that show killings of American soldiers. YouTube snuff? Or is it YouTube doing news? Is a sniping seen on Youtube more truthful than what news agencies are willing to show, or are these images reprehensible and sick? What is truth, when truth is produced, edited, narrated and told through media that put us “in touch” with events beyond our direct experience? How do we judge what’s right and wrong? How do we get the better of our curiosity–when confronted with videos that capture the appeal of the appalling?
YouTube is a phenomenon, that like MySpace, represents the a paradigm shift from mass media to social media (my media, mini-me-dia). It is proof that user generated content is much more than the publication of end user commentary. The mass media now report on social media. They source content from social media. They’ve embraced social media and so use it to distribute themselves…
What’s happening is not just a shake up in the ownership of the media. It’s a shake up of the ownership of narrative, of telling the news, of creating our images and spinning the stories by which we reflect ourselves and through which we define and understand ourselves. And insofar as the media are always attached to a society’s control and self-regulation, phenomena like MySpace and YouTube, which appear to have a tenuous (at best) relationship to monetization and profit are a real and present threat (to institutionalized power; status quo).
I’m not for sniping videos. But what’s going on is clearly more than that. And it would be a pity if YouTube had to respond in the way that Google had to respond in China. And yet I’m loathe to say it like that. Things have gone topsy turvy.
War is Peace. Orwell, indeed.