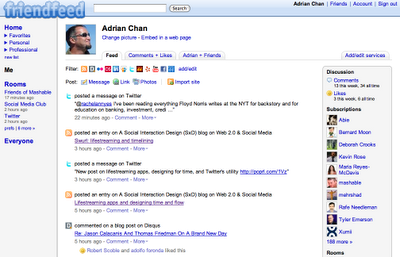 Feeling overfed lately? Sidle up to the trough, there’s company here. Yes, subscribing to feed-based applications can be like drinking from a firehose, especially during times like these. When the daily news is itself the topic of presidential campaigns, late-night talk show hosts, politicians (relevant or not, incoming or outgoing), and the news media in general, being on a site like Friendfeed is a bit like Hussein Bolt gesturing for the Jumbotron at the Beijing Olympics.

The echo chamber is also a hall of mirrors.

All social media play some part in mirroring us, reflecting us, whether to ourselves or in front of others. And this doesn’t make every social media user a narcissist. It simply admits to the shiny and reflective surface of the social media screen — and to the facts that we like to see ourselves reflected in this screen, and like to be seen by others. It’s a particular kind of vanity, of self-image and self-promotion.

I’ve written about self-image and profile-based social networking, but haven’t really applied it to lifestreaming. Of course lifestreaming apps like Twitter also mirror us back to ourselves — indeed, it would be strange if we didn’t see our own tweets alongside others. The production of a self-image online is essential to how lifestreaming works, and why. But oddly enough, original activity feeds weren’t posted by users at all.

Facebook can be given credit for having popularized the feed: activity, news, status. Activity and news most of all (Yahoo and Friendster each had shout outs, as did many social networks have a mood option (even blogs have had mood options for inclusion with posting). But Facebook was feeding us system messages (still does). It’s Facebook’s inspired way of making the site seem more active than it is. Everything a user does is captured, recorded, and considered for re-telling. So in Facebook’s case, it often is not the user doing the talking, but the system doing the talking: Facebook was the chamber, and Facebook was the echo.

It is easy to bundle applications together because they use the same forms, or contents. All feeds are not the same, and all lifestreaming services are not the same. Their use of activity streams, status updates, commenting, and variations on posting, etc., suggest common design and architecture in many cases, yes, but these commonalities may conceal substantial differences. A system message that reports on my activity, as in Facebook, doesn’t appear to me as something I’ve said and I won’t relate to it as if it were speech. Nor is it addressed to anyone in particular, either. But as it’s produced by the system, it may have meta data, and embedded media types, that are better structured than what I may have used in writing/tweeting.

The matter of who’s talking might read like a matter of small print and footnotes, but consider the fact that in lifestreaming apps all content is posted by users, and all content is intended by users. In lifestreaming apps users can talk by writing, recording, sharing, and so on — the applications increase our ways of talking. But in all cases they are still about talk. Facebook, by contrast, is about the aggregating content around an audience (call it graph or network). User activity is documented in feeds — it’s not conversational but is informational (informative).

On a site like Facebook, as commanding a lead it has in the market, members need not be encouraged to lifestream. Facebook provides social utility even to low-participation users. It offers a broad number of application types as well as pages, groups, and of course profile-centric activity. But lifestreaming services, on the other hand, do have to encourage participation. Talk needs to be sustained, as well as user attention. Hence Friendfeed’s integrated commenting, and close attention to supporting commenting.