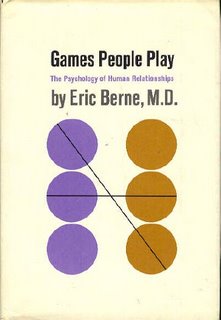 From the reading notes:
Eric Berne’s Games People Play, popular during its time but no less fascinating and perhaps even relevant to a theory of mediated interaction, is a wonderful reading of the transactions of emotional “strokes” among people interacting with one another. For Berne, human interaction is always engaged in this fundamental exchange (his theory is exchangist, I think), one that seems to have an effect on the body and on personal well-being as well as having its obvious effect on emotional and psychological dispositions. Though we would have to conjecture as to how human interaction can even communicate with biological systems, I see no reason to so here: it’s pretty obvious that we are capable of making each other feel good, as we’re capable of truly stressing each other out also. That our moods affect our health is well, just as obvious.

What then of the interactions that occur when we’re not face to face? What of Berne’s stroke? Let’s, for the challenge of it, take this fuzzy but genuine insight, this notion that we communicate in order to provision ourselves and others with a feeling of membership and well-being that has no content itself but is instead the subtext of all content of communication, and map its transposition into mediated social interaction.

Reading Notes: Eric Berne’s Games People Play PDF, 17 pages. Eric Berne’s work on transactional analysis has long fascinated me for its insights into a dimension of interaction that involves basic emotional acknowledgment and recognition: a dimension that would seem diminished by the online interactions and communication that occur without face to face transactions, but which might nonetheless motivate our interactions nonetheless. If it were the case that online interactions attempt to get at the emotional stuff of life that’s not immediately present, perhaps through substitute signs, gestures, the use of etiquette or other displacements and substitions, then we could claim that the online world is thin, but offers promise. A lot can be done with ASCII.

All my reading notes are here.