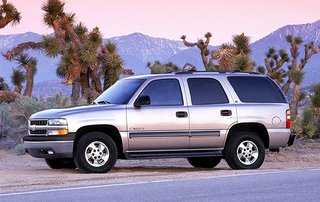 Interesting article in the NYT today about GM’s experience soliciting user-generated content. Namely, ads for the Chevy Tahoe. GM’s experience, not surprisingly, solicited some, hm, should we say un- or solicited, ads decrying the mighty four-legged, earth munching, grass-mowing, tree-felling, carbon-spewing beast of dirt trails (rarely) and grid lock (mostly) for its excessiveness. To quote film director Paul Thomas Anderson, himself quoting responses to his film Magnolia, the Tahoe is just “too too.” Too much, just too much. Surprised? Not.
So what’s an ad exec to make of it? Of course they knew that if they let consumers create their own ads for their Chevy Tahoe they’d get more than a few slaps in the face. But this is not just a case of opening up the phone lines for callers out there in radio land; this is not just one of those NPR moments…. this can’t be, just, one of those… (PTA, laughing yet?)
Let’s back up so that we catch a glimpse of the forest, while they’re still there, greening as they do. When GM puts an SUV in a forest most of us are smart enough to separte the image from the message. And most of us immediately re-write the message. A commercial’s message is one “truth;” the viewer’s truth may be different. Truth is not carried in the message. Language doesnt work like that; nor does speech. But something happens with speech–and advertising is the brand talking at you. A claim is made in the message content itself. Another is made about the speaker’s sincerity at the same time. This is the difference between what you say and whether or not you mean it. And what happens when we see a Tahoe in tahoe is that we separate what GM says in its ads from whether we think they mean it. The idea behind inviting consumers to create their own ads is to bring the viewer into the production normally reserved by the speaker. It is not important that the viewer agree with the speaker. What GM gains is not that consumers show their agreement with the Tahoe message (buy an SUV). GM gains trust among consumers that they mean what they say.
If the campaign can work, this, I suspect, is the wager waged by the execs who thought it up (and they weren’t the first, though they are perhaps the bravest). GM stands to gain credibility and integrity. As General Zinni said recently about the Iraq war, integrity and honesty are, ultimately, more important than loyalty. Which would you value more to your brand, if you were an ad exec? That customers agree with you, or that they believe you mean what you say? It’s a move from talking at the consumer to talking with the consumer. This, I think, is the crux of soliciting user-generated content.