Skip to navigation Skip to content
30
- January
2006
Posted By : Adrian Chan
No Comments
Text messaging and the ritual of the gesture 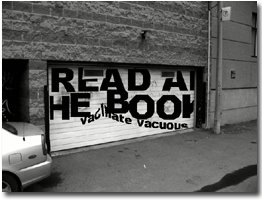 Excerpt from a Skype IM today w/ Jason Lewis, old friend and fellow geek at Montreal’s Concordia Univ. The project referred to involves projecting txt msg’s into public spaces. The artile I sent him was just in the NYT and covered the use of shorthand in txt messaging. Aside from the article’s shrug of a conclusion, the author did note that “In China, moreover, many people believe that to leave voice mail is rude, and it’s a loss of face to make a call to someone important and have it answered by an underling. Text messages preserve everyone’s dignity by eliminating the human voice.” Which is exaclty right, I think.

adrian chan
read this and thought of your project. txt msg shorthand is a typographic intervention and interpretation in its own right. wonder if you could play with that. dunno, maybe your software converts to longhand and animates? reads a l8tr and displays Laaaater!
1/30/06 2:13 PM

Jason Lewis
or vice versa. or both ways at once, depending on the input. interesting idea…
1/30/06 2:14 PM
…
“The most depressing thing about the communications revolution is that when at last we have succeeded in making it possible for anyone to reach anyone else anywhere and at any time, it turns out that we really don’t have much we want to say.” …such a thin reading what “want to say”.
1/30/06 2:16 PM

adrian chan
cheap ending, i thought so too. any sociologist would tell you that txt msging is a form of goffman’s civil inattention. i call it undemanding attention, but there’s got to be a better term. it’s a ritual greeting and as such exempt from expectation that it “say” anything. we dont use ritual to say things, the ritual uses us to reproduce social habit…