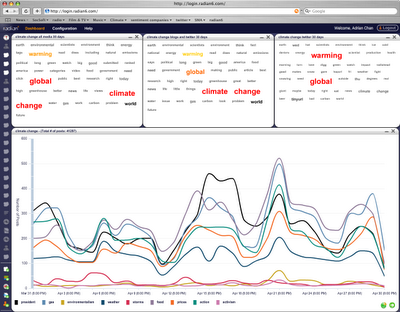 Using Radian6 to investigate social media conversations around one of my own personal involuntary preoccupations — climate change — I geeked out this afternoon for a while and have these screen shots to share and discuss. What you see above are three topical clouds created by a search across media types over thirty days for the keyword phrase “climate change.” (Click it for actual size.) All media (top left) includes blogs and forums, video, images, mainstream online media, and twitter. The top middle shows results from just blogs and forums, and twitter. And the top right window shows results for twitter only.

Below the cloud panes is a topical drill down spanning the same time period: showing results for terms within the “climate change” results. (In other words, a comprehensive survey would require additional searches. Each results in a bucket of results that can then be further filtered and searched.) 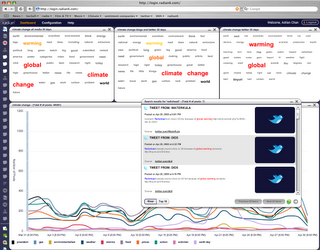 I noticed “radiohead” in the twitter view, top right, and clicked it to see posts. (screenshot on left). Cooler heads prevailing, Radiohead had turned down a US promotional gig to spare the air. True or not, I didn’t have time to check. 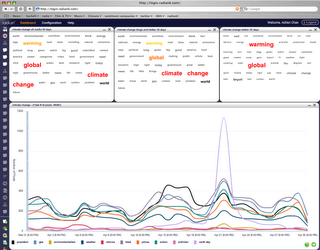 Looking at the results, I clicked the peak on April 21 to see what was up that day. Doh — earth day. I entered that, and a few other terms, for the screen to the left. (It being earth day every day here in San Francisco, this one had pretty much slipped out through the fissures that crack me up, in my mind, way in the back of my mind…. Ok, honestly, earth day a bit redundant nowadays, isn’t it?)

I used the cloud views to find keywords to add to the trend panel. Radiohead didn’t register in the trend panel, for example. “Green” is just below “earth day,” suggesting that perhaps “Green day” could have taken advantage of some free media coverage (are they still together? I confess I don’t recall. Another case of fissure. Fizz-ure… ) Next in prominence on that day were “food,” “gas,” “action,” and “president,” which, if I were a writer for The Colbert report, I could have made into a joke, using, perhaps, either “food” or “gas” as the subject of “action” taken against the “president.”

Interesting that on Earth day both food and gas were of concern. Food growing or food eating? And seeing as “prices” are just beneath “president,” it’s possible that food and gas prices may have occurred in Earth day commentary that included administration policies and leadership. Or not. One doesn’t want to read between the lines. (Though the lines are pretty close together, and track nicely, so hey, why not?)

As you can see making sense of these verbal trends is not rocket science. Could we have guessed without searching that food and gas prices would come up together? They track with earth day, but to be fair, there was a UN report released that wknd regarding the food crisis. It’s possible that they’re related. Wouldn’t take a poet.

Now what’s cool about this tool is that you can read the news sources for any additional key phrases right here. Even view videos. And you can browse a list of influencers (sites and blogs) for the topical profile. Shown here are influencers and a “river of news.” Global warming was the biggest hit within “climate change,” and shown here are posts that refer to global warming. (Inluencers can be sorted by unique commenters, total comments, enagement (number of comments and length of comment), and topical inbound links.

Now in this view, which focuses on April 20 – 22 (earth day and one day prior and post), there are interesting differences between the topic clouds for mainstream media. Look at the list below. Differences in terms used in the mainstream media, on blogs and twitter, and on twitter alone, are clear. Mainstream media describe a high-level view of the discourse, blogs, commentary on that discourse, and twitter, more personal and actionable conversation.

So far this search has turned up roughly what one would expect of it, and indeed you find what you’re looking for when using measurement tools. The benefit of tracking end user conversations such as those on twitter ought to be in the authenticity of twitter talk, and in its speed and immediacy. Radian6, because it updates in real time, can be used to follow these conversations as they happen. That said, it’s necessary to supplement twitter talk with blogs and mainstream media, for they provide the narratives, arguments, and semantic map of the conversation space. Topical context is assumed by twitter users (as it is often in chat and IM) — that context is provided by the slower talk media. At this time, twitter is still very small, and on-topic results for searches on twitter are noisy and fragmented. But for those interested in personal expressions and conversation, and for a read on real-time audience attention and interest levels, there’s a lot of potential yet in what twitter can surface.

Note: I did not explore Radian6’s tools for influencer results and additional keyword drilldowns in this post.