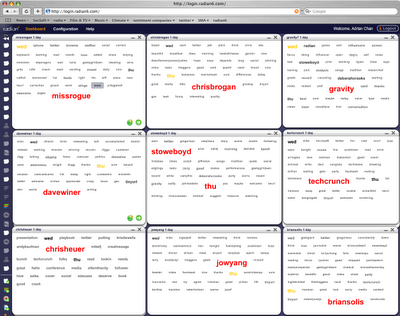 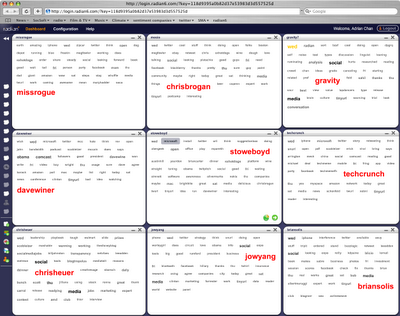 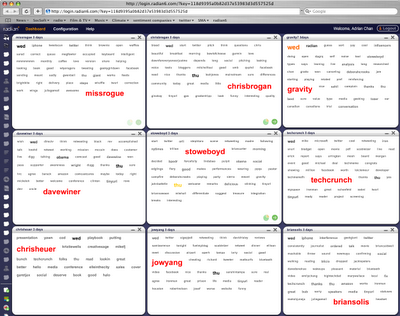 These screenshots are taken from Radian6, social media monitoring application that I’ve been using for the past couple of days.

You’ll need to hit each of these and pop them to full size to be able to read them. If you do, you’ll probably wonder as I did what, if anything, this tells us. These are cloud views, and could be provided by tweetclouds, but I found it handy to be able to lay them side by side, and to be able to flip each window over and change parameters (eg. date range). And they’re updated in real time, so they refresh every few minutes or so.

The value proposition here is that influencers influence while talking, and for those of us on twitter, this means talking in 140 character posts. I had to stare at these for half an hour before I began to see things. (my screensaver kicks in at 30 mins. just kidding). You can click the words to read the posts that included them. I started counting how many were in each (this has to be done manually, so it would be great to see a post number on rollover.)

First of all, the tags include any post from the user as well as posts to or in which the user is @named — so while Dave Winer showed 124 posts for comcast, not all were from him. Likewise, I noticed that Arrington was the only one “reading” — but it turned out that the term was used in posts in which other twitter users said they were reading techchrunch (not in fact that they were reading arrington’s tweets, but techcrunch articles).

With the influencer value proposition still in mind, I tried to read between the lines, or through the gaps, and what struck me first was that in the combination of words shown for each twitterer, one could make out three kinds of conversation: every self-referential talk (apropo the invitation that still begs participation on twitter.com: “What are you doing?”); exchanges with other twitterers; and references to companies, activities, sites (urls).

From stylistic differences in terms that convey everyday experience, you can make out some of the personality of each twitterer. This is even more clear in the 1 and 3 day views than in the 30 day views (yes, that’s thirty days — more than other twitter search clients). These influencers vary in their personability, enthusiasm, self-disclosure, and vary also in how personal or impersonal they come across. Tara comes across as friendly, Jeremiah as professional, arrington as a journalist, brogan as interested. While I follow these folks daily, I purposely did not read their twitter archives — so that I’d be reading as much from terms shown as possible.

As you close down the time frame, terms that are surfaced shift to the present. No surprise there. Interestingly, heuer maintains a more regular repertoire (see how his terms are fewer and larger). Most influencer show a fairly flat conversation space — that is, few words really stand out during the 3 day snapshot view. Solis gets credit for “thanks”, which stands out and makes sense given what he does — PR. Solis gives and gets a lot of gratitude. Tara uses the most expressive and emotive terms, suggesting that she tweets more about how she is feeling. Winer clearly had something up with comcast (the heavy throughput problem), and heuer, solis, jeremiah and myself reference “social media” quite a bit — if one were pushing social media, we’d be good targets as we speak it already.

Down at the one day level, it’s easy to see who addresses other twitterers, and is in (public) conversation with them, and who doesn’t. One also gets a sense of the day’s topics. Solis’ topics change significantly between the one and 3 day view. Heuer’s remain for the most part the same — however, he might not have twittered much during the one day time period, and I didn’t check.

In moving now from everyday conversation to topical conversation, we can look again for influence. Influencer, influencer on the wall, who’s the most influential of them all? These cloud views don’t account for reputation score, or use a conversational index (such as suggested by stowe). They account for numbers of follows/followers, and because there’s no metric for page view in twitter, don’t account for impact.

So the terms, while shown in the same font size, can’t give us comparative topical influence. They more simply show us what these influencers tend to talk about. Because tinyurls are captured only as words, and not parsed, we’re not able to see what these users have posted links to. But we can see who does post links. Few of the social media company names, applications (facebook and twitter excepted), or buzzwords appear here. That’s not surprising, given that these users maintain their own blogs, belong to a high number of social networks, and are regular face to face contact. Much of what surfaces in the social media space, therefore, might not make it into these conversation clouds verbatim.

(What does surface is often in the tinyurl). However, these are just my interpretations. (For example, stowe, deborahcrooks, and I just had a guitar/singing jam session at my place, but the words “jam” “guitar” “session” etc passed below the radar, or were the subject of direct messages. This begs the question of private and public conversations, and a lot of value is passed through back channels.)

Note that a view of influencers in popular TV, movies, dvd rentals, bands, cars, celebrities, etc, might show very different results. Influencers who don’t make regular face to face contact should produce more explicit topical references in their twitter conversations. In fact a quick survey of Lost fans and Lost tweets showed a great deal of detail right after last week’s (awesome) episode. Lost fans can use a shorthand, insider references to theories, and so on. Highly coded 140 character conversations take an insider’s knowledge to understand. While radian6 did surface “OMG,” I’m guessing that some social media analysts might have missed “OMG” as a term of extreme enthusiasm and brand affinity (! — not to mention WTF!!!).

I skipped over my second observation — references to other twitterers — because it’s fairly straightforward. It would be cool if these were denoted in the tag clouds by use of color. Speaking of color, it would be cool also if rolling over one word would highlight the same word in other profiles. Widgets don’t talk to each other, however.

There’s one powerful dimension of this that I’ve not yet brought up, and that’s the real-time updates radian6 provides to each window. I could see using this for clients. In fact by keeping lists of topical or domain influencers, together with their blogs, one could provide a client with intra-day monitoring. Each widget can be exported as a graphic or as xml, and emailed from within the application, with notes. This would be perfect for real-time tracking — say of events, breaking news, product launches, pr, marketing or advertising campaigns.

It would be great to see this with cross references and relationships (a social graph) built in. One might then get a better sense of the overall conversation space. This approach looked at individual influencers — a topic approach requires setting up widgets by keywords, and results vary immensely by the correlation of search terms to tweets. I’m sure I’ve missed quite a lot, but this post is already far too long.

Thanks for your attention!

Just some arbitrarily chosen terms, with number of tweets returned for each (written to, by, or citing that user):