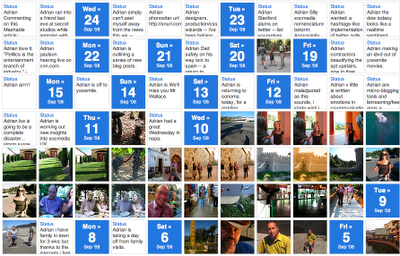 Like many of you, I simply can’t keep up with the river of lifestreaming applications hitting public beta this year. Many seem to simply do the same thing, more or less, with a bit more of this or a bit more of that to differentiate each from its competitors. But social apps are bound, perhaps more even than “conventional” software, to conform to best practices. Why? Because they are social applications. Social applications succeed only if they can extend the individual user experience out into new and interesting social experiences.

And they do have to be interesting — for social applications, again more than conventional software, must be interesting. More often than not they are interesting because they are used as tools for talk. Talking with, to, at, amongst, in front of, behind, and to the side of. Talking with friends tends to be interesting to those involved simply because it is among friends. But where the face to face dimensions of social interaction are also rewarding for the obvious reasons, social applications must deliver a working substitute. There is no real “spending time together” online.

Even chatrooms, which are as much a precursor of lifestreaming as anything else online, can only approximate this sense of togetherness. I recall early days in IRC chatrooms where that sense of being there or of being in it was as much due to the suspense and waiting (for somebody to type out their response) as it was due to the “room” itself. One might even argue that this pressure of time grows in the user the slower the technology is to record and transmit time. The longer the latency, the greater the waiting, and thus the greater the anticipation, suspense, and urgency! (Is it not said that suspense in film is simply the time that it takes for something to happen?).

Swurl.com is interesting because it has a visual timeline of the lifestream (pictured above). In calendar format, and well-designed, the timeline looks good and is an attractive visual representation. It’s low on conversational content and talk, but it captures the past of a user’s activity in a compelling presentation. Plurk.com also has a timeline, but one that is used to steer interaction (and which looks more like a horizontal river display). Not only does Swurl’s calendar provide thumbnails of pictures and shortcuts to posts, it expands to accommodate periods of heavy activity. All days do not look alike. I like that.

This variation is important in lifestreaming apps. In contrast to the profile-based site or service, the stream stands in for the profile. The person’s talk stands in for profile elements. These choices make sense, because the call to action in a lifestreaming service is talk. It’s not browsing, searching, or navigating. At least not quite yet (I believe we’re ready for more order and structure). Really, each message/post/tweet in a lifestreaming app is its own call to (inter)action, which is also why most users are in it “now” or never.

Which makes Swurl’s representation of past user activity interesting to me. Most lifestreaming have stayed away from the archive of past activity (what’s the pleasure in paging backwards through a user’s posts?). But there’s a lot of value in past activity, and visual coverage of the past can take many forms (think Edward Tufte). We’ve seen none of them yet (Chirpscreen’s slideshows come to mind, though it would be nice to see them become actionable) but I’m certain that we will.

If twitter is the power curve of lifestreaming, then apps like swurl might show us some of the value in the long tail — the long tail being the past. To picture this, take the standard long tail graph and turn it sideways. The Present is the curve, the Past is the tail.

Mining the tail of time is mining in depth rather than mining across connections. Mining the connections of past time, for lifestreaming apps, might mean drawing connections across the past times (pastimes, experiences, too) of a site’s users. Currently, Swurl engages conversations around a user and his or her posts. But we could imagine indexing user streams for the purpose of making connections and extracting content. After all, a user’s post posts, talk, uploads, etc are used by many applications to predict or anticipate choices and preferences.

I’m excited to see what Swurl, with minimal complexity, has done to wrap a bit more around lifestreaming than we get out of tools like twitter. Twitter will remain for me my primary talk tool, as it has and will continue to have the best audience awareness. But if you wanted to imagine social networking, and profile-based social networking around lifestreaming instead of profile pages, Swurl would be a good place to start.