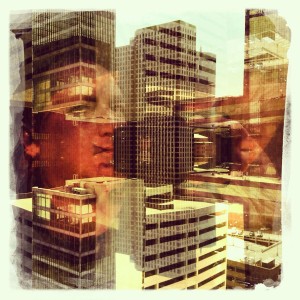 They say a picture is worth a thousand words. That’s because a picture says something. What is says, by whom, or to whom, is not the point, and can’t be, because the picture is not a linguistic expression. While it says something, it says nothing in particular, and to nobody in particular. It is, in many respects, the perfect expressive form for social media.

Instagram is the social form of the image par excellence. Instagrams are pictures with sharing built in. They don’t exist unless they are shared. Liking, following, tagging, and commenting all provide the conventions of social networking. The image becomes a communicative act — but of a kind germane to social media: communication and action both simplified to a form of lowest energy. Communication as gesture (not speech); action as implicit (instagram does the sharing).

We externalize ourselves through our connectedness. Words, images, signs — they make us present in our absence. Social media provide proxy social context. This is the digital culture we have become, for better or worse.

The image, as an act of expression, inherits from the medium. The social screen has three modes: mirror, surface, and window. In its mirror mode, we see our image. In its surface mode, we can “consume” content rendered onscreen. In its window mode, what’s onscreen disappears and we see others and communicate with or to them.

These are the modes of the social screen in general, and supply the medium with its unique personal and social valence. But the social image adds to the properties of screen.

The social image is thus unique to the medium. It is far more than a thousand words. And for this reason Instagram has successfully built a sharing network as richly presented, liked, followed, tagged, and commented as many text-based tools.

In all social tools, the content by which users communicate is more than it appears. It is invested with the interests of its creator. It is intended to communicate to others. It is motivated by the investment its owner has placed in the medium and his or her place in it. It is subject to interpretation by means of what it is and the context in which it appears. It is read by viewers according to what those people know of the author, and how.

The psychic and social dimensions of mediated social activities are subtle and real. Fundamentally, the sociality of social tools operates by proxy. People are the content, but only because content substitutes for people. To the gesture, and the word, we add the image. And that only makes sense. For the baseline of social existence is visibility. We are social to be seen.