So the paint is still wet on Google+, but I have had a chance to spend time in it and get a feel for how Circles have been implemented. As I wrote yesterday about social boundaries, and the awkwardness of forcing people to group friends, family, acquaintances etc.,  I can add a bit more today about Google’s implementation of Circles.

Circles seem at first to work as contact groups. You simply, and I must say very elegantly, drag and drop contacts onto circles. There are a few provided by default (family, friends, etc) but it’s very easy to create new ones. People can be dropped into multiple circles. 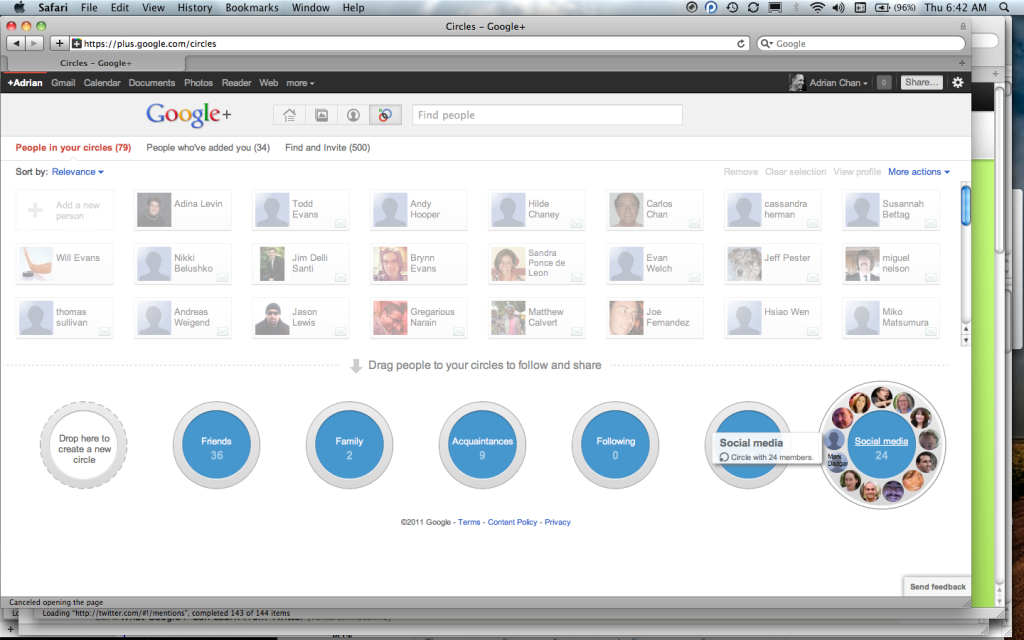 Each circle becomes a group name then shown on the left side of the home page view. In selecting a circle, you filter the stream. Updates from members of that circle are shown in the center panel. All of this feels like Facebook Groups. 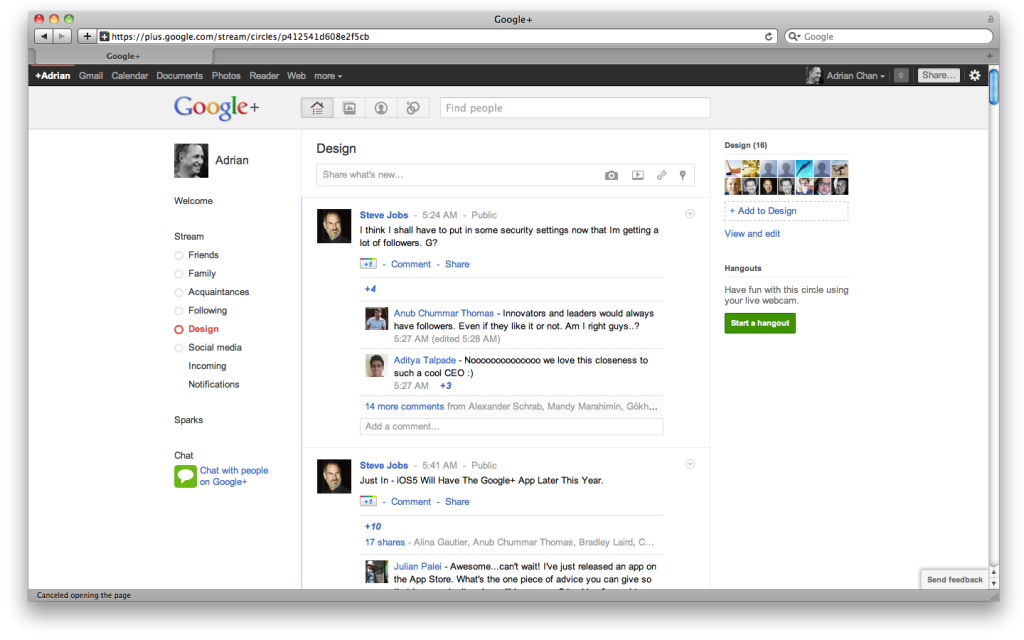 When you select a circle to view by, the post element at the top of the page defaults to the Circle chosen (as seen here).

Now this is where it gets interesting, and potentially becomes a bit confusing. Up to now the Circle has acted as a filter on posts. So it works like a twitter list. The circle was defined by me, and so as in twitter, I an the only one seeing this feed.

But post feeds, particularly when they have comments, become conversational. This means that the circle of course is not a hard constraint on who I see in the feed. I see comments from others not in my circle, and not amongst my friends, etc. No real problem yet, I’m still having a Facebook groups/Friendfeed type of experience.

It’s where I elect to post to a circle that things get confusing. In choosing to post to a circle (in this case, Design has been added to the post element as I’m in my “Design” circle now), I’m posting as if to a group. But because the people in my circle haven’t joined this group, there’s no shared group experience. I am simply notifying members of my Design circle of the post.

This leads me to a couple concerns.

First, conversations in Google+ are leaky. So what is the purpose of trying to constrain a conversation to a group, if the group isn’t really a social group but is instead a contacts group?

Second, conversations are transient. So how helpful is it to have circles of contacts when in fact I would rather be able to use them source addressees from. I want bubbles, I think: the ability to drag people out of circles into a conversation. If my circles aren’t social groups (members are visible to each other, and we have a shared page for discussions) but are contact groups, then I have little incentive to try to hold conversations with circle members. The utility of circles is served in sourcing/finding people I know easily and quickly. There’s no shared social utility — as in forming a conversational group (as there is in Facebook and was in Friendfeed).

Third, members of my design circle are diverse, and not all need to be a part of every conversation I’m interested in starting or holding in Google+. So circles aren’t topical. This, in spite of the fact that many of us will define Circles topically and thematically.

I know it’s early days yet, but Circles have been defined to act as stream filters. I see the design thinking behind making circles available as post audiences, but this functionality is elusive because it seems incomplete. I think Google+ should either give us shared discussion pages (a group page) for posts targeted to a circle, or it should allow us to bubble conversations by drawing on Circle members (in which case the circle helps me find people).

I’ll be interested to see how this shapes up over time. There would be a lot of power in bubbling the stream for tighter conversations. Both discovery and exploration would be served well. And stream bubbles would make nicely persistent, semi porous, and transient conversation formats.

What are your impressions?